A serious comedy about motherhood, feminist legacy & the future. 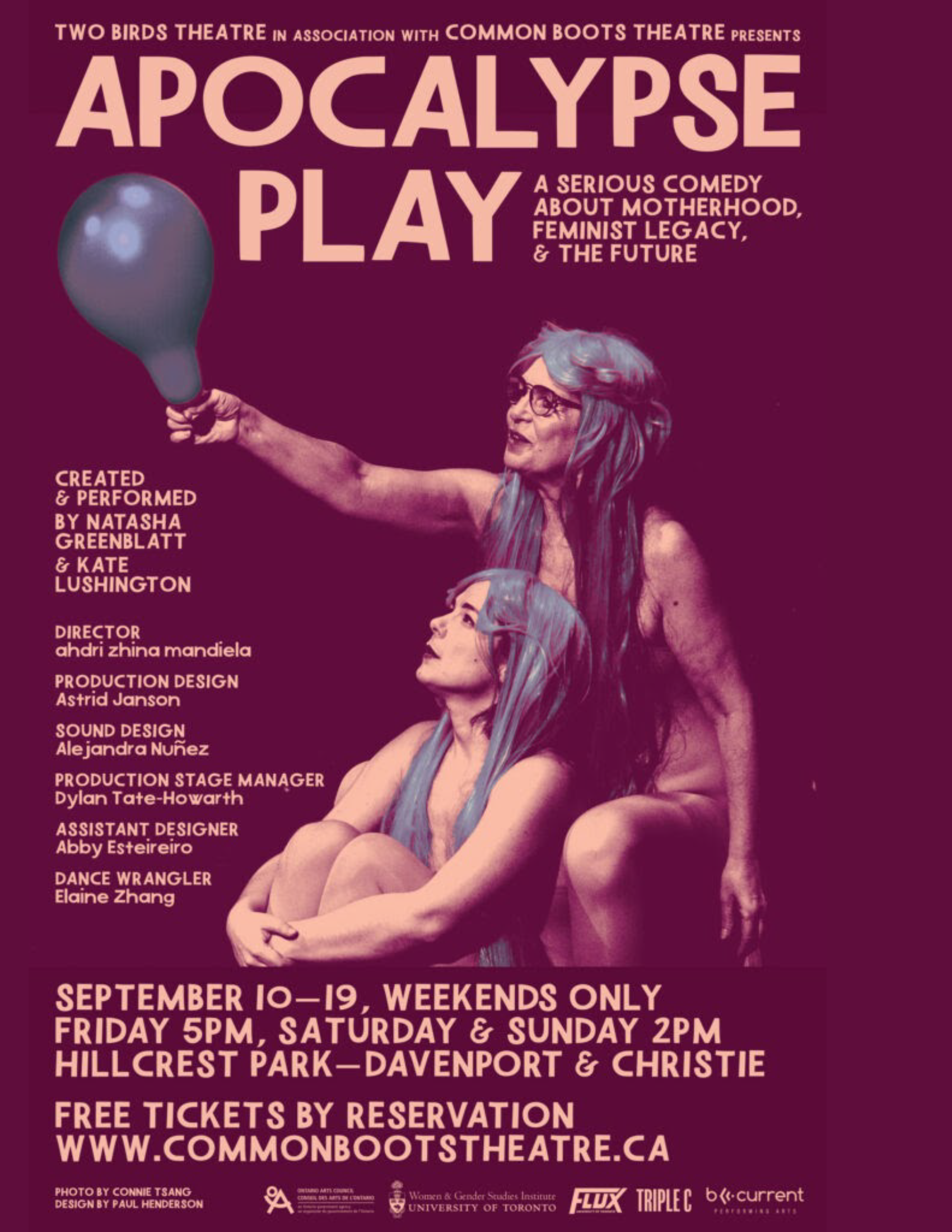 Apocalypse Play is very funny show about what we inherit and what we pass on, as the clock ticks towards climate catastrophe. Who will take care of the future? And will there be dancing?

In Apocalypse Play, Natasha hauls her mother Kate onstage in Hillcrest park to revive her vintage performance pieces about grief, sex and childcare after the Bomb. Natasha plans to unearth and celebrate her mother’s hidden history, as they create a new play together on the edge of the abyss. Packed in her wagon, Kate holds onto family photos, archival artifacts and souvenirs, along with a giant placenta complete with umbilical cord. Is there a ritual for raising children in the apocalypse she wonders? Can it be passed on? But the audience is here now, and the play’s the thing. But are they making the same play? 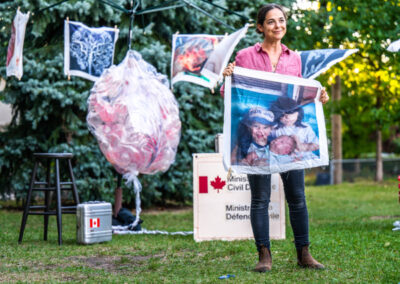 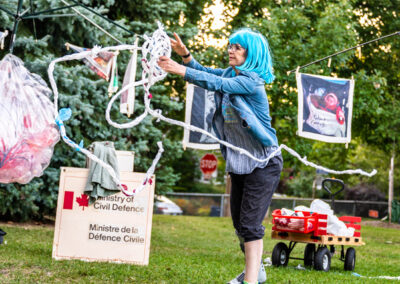 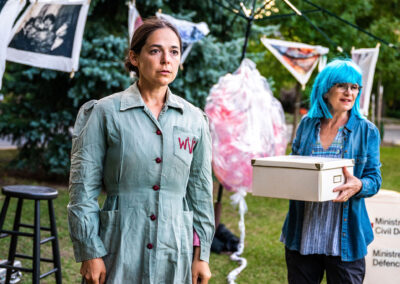 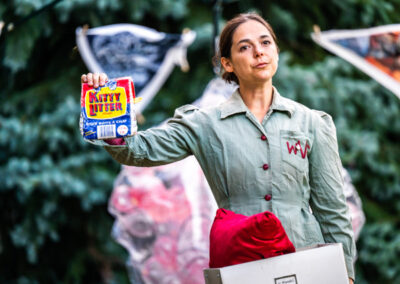 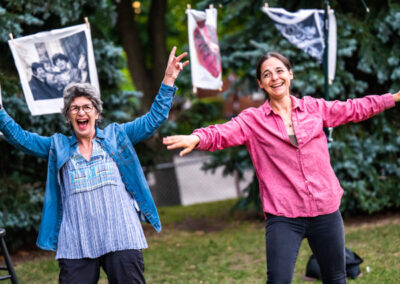 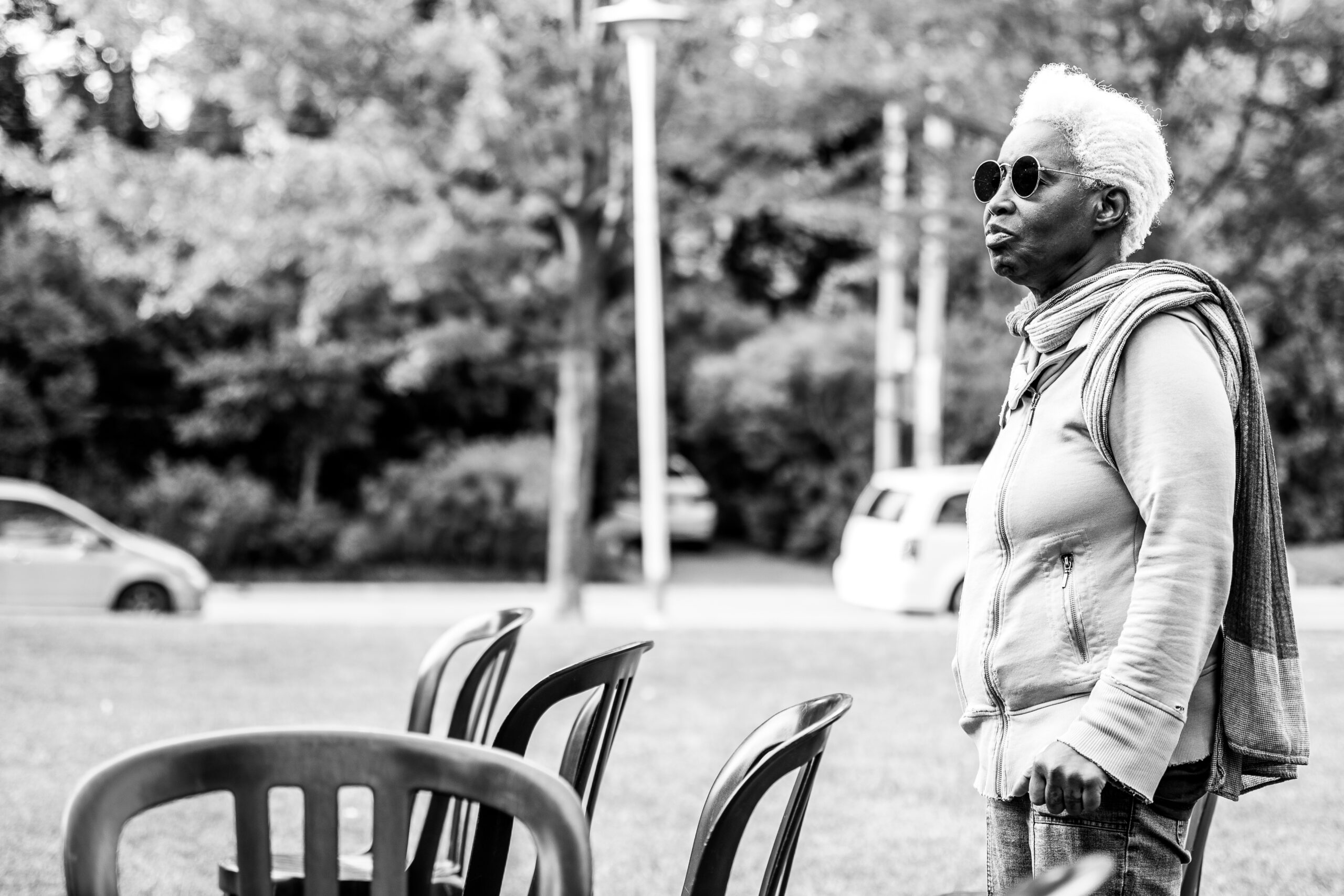 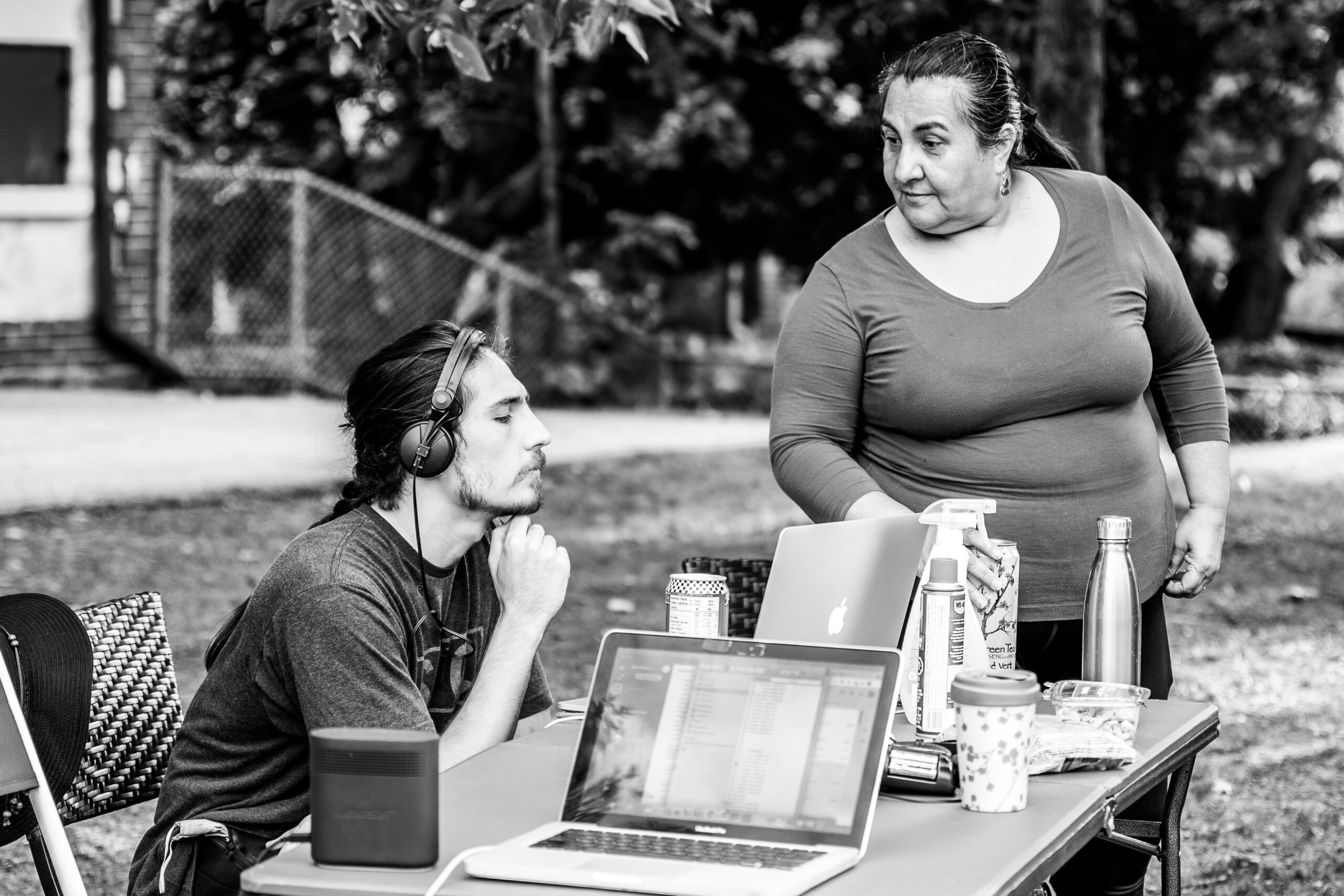 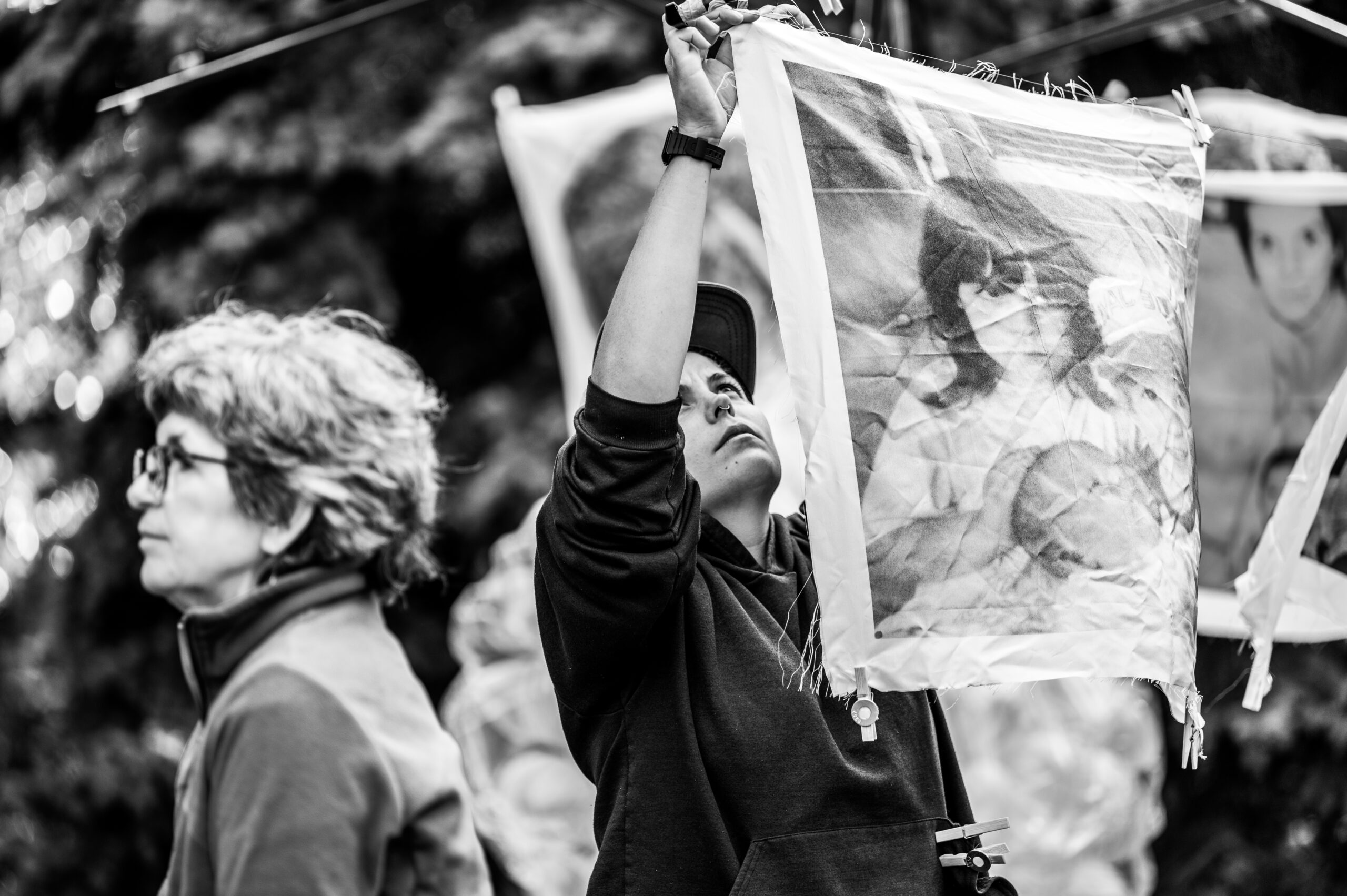 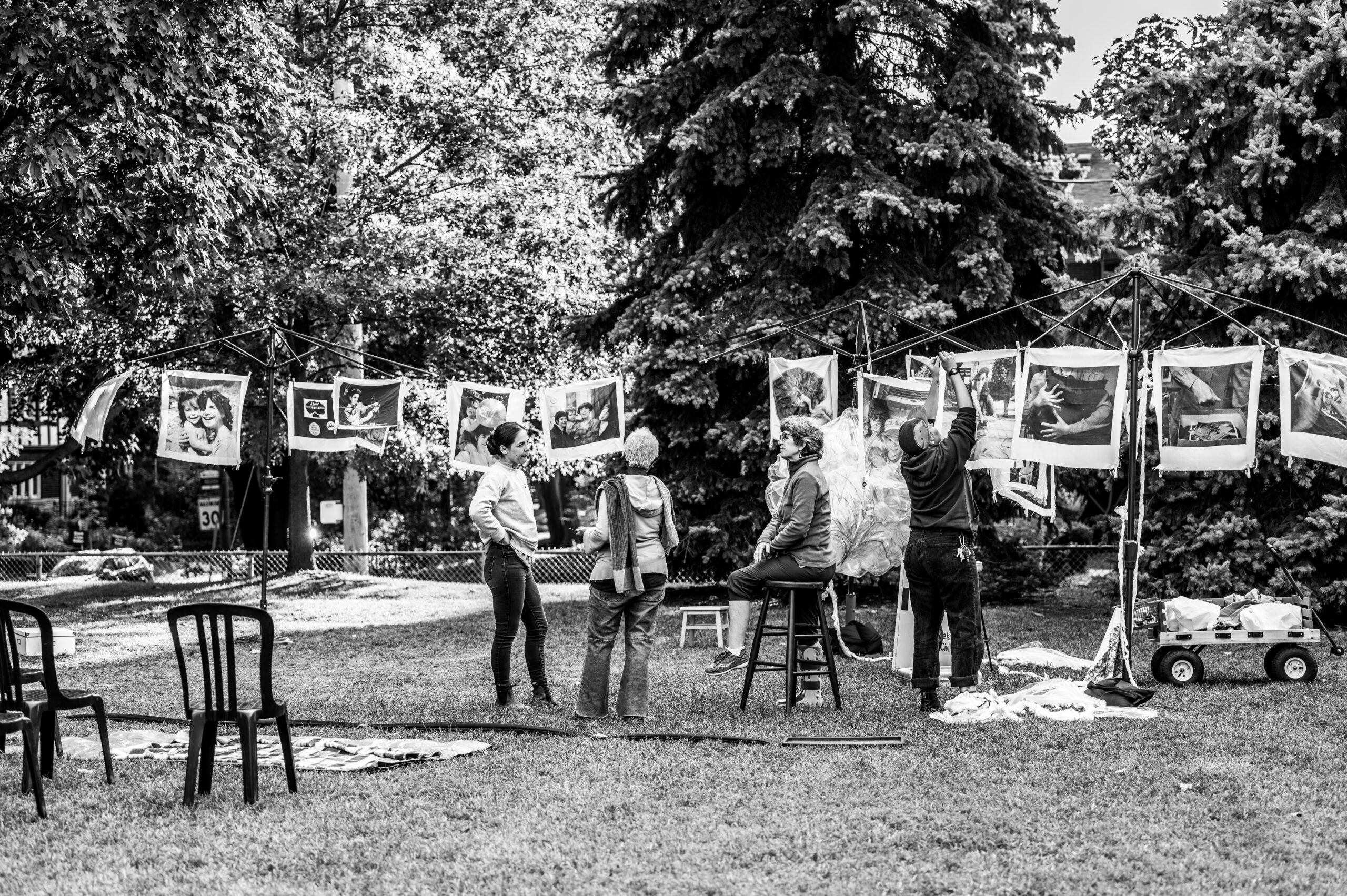 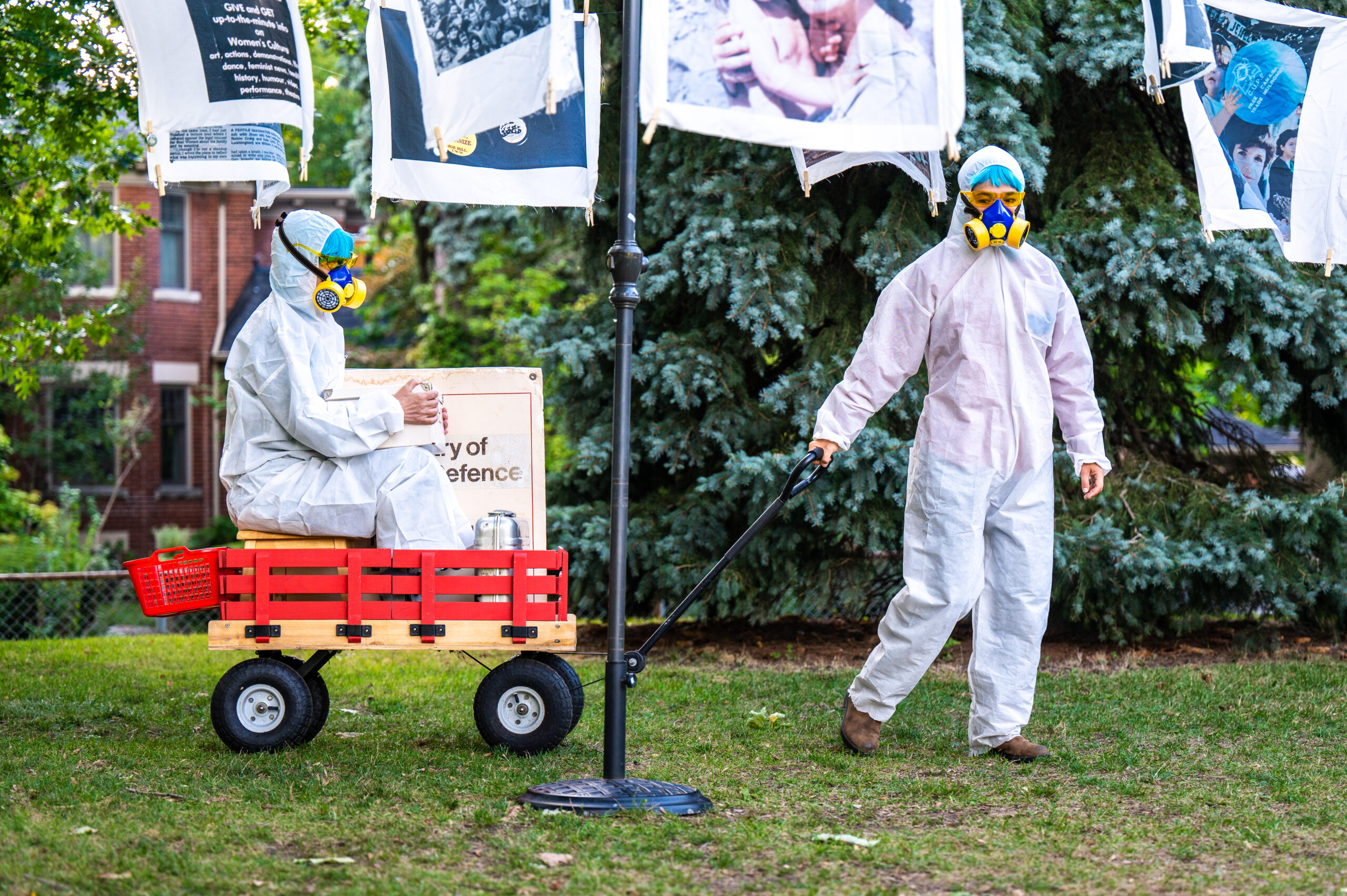 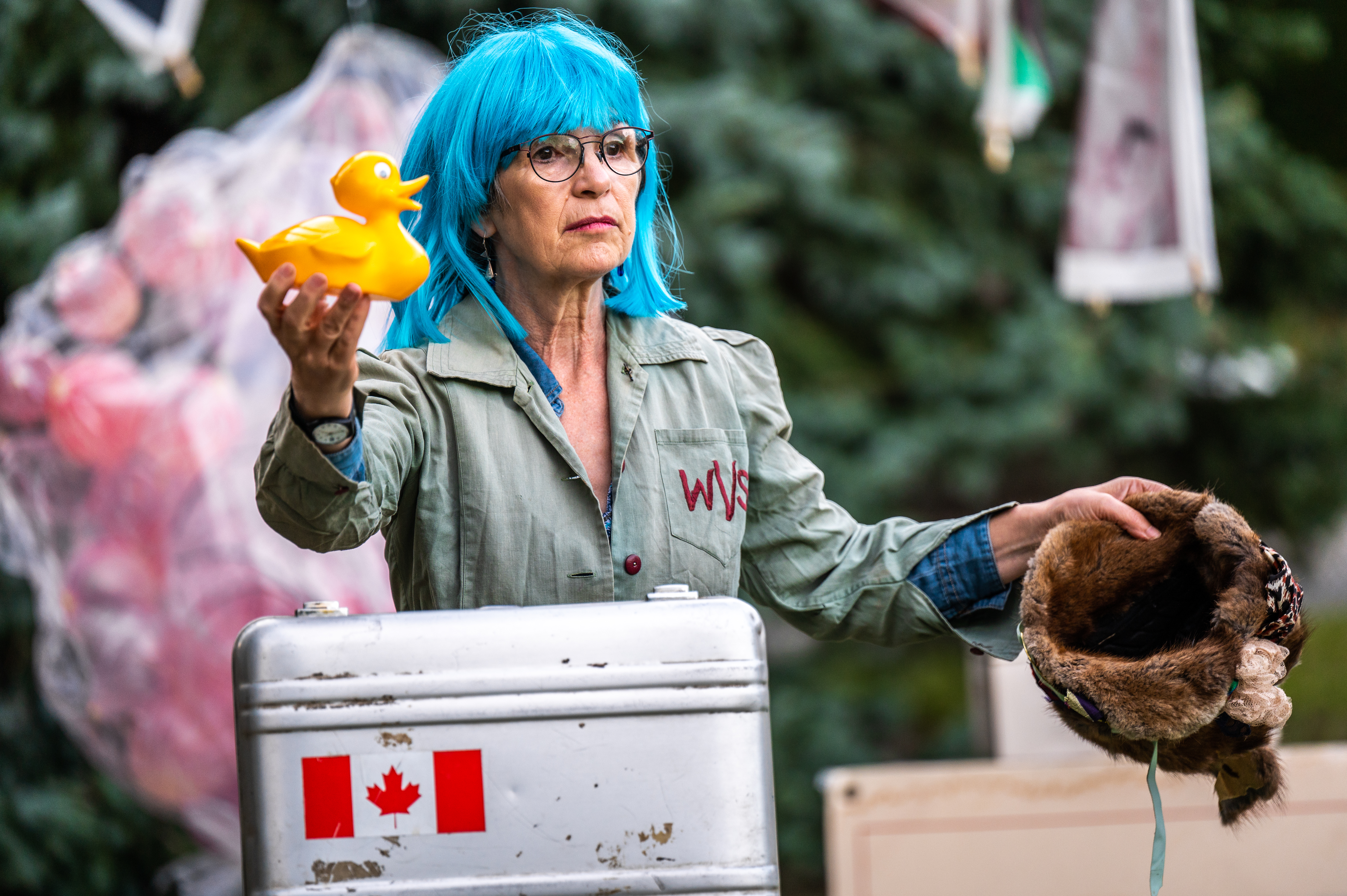 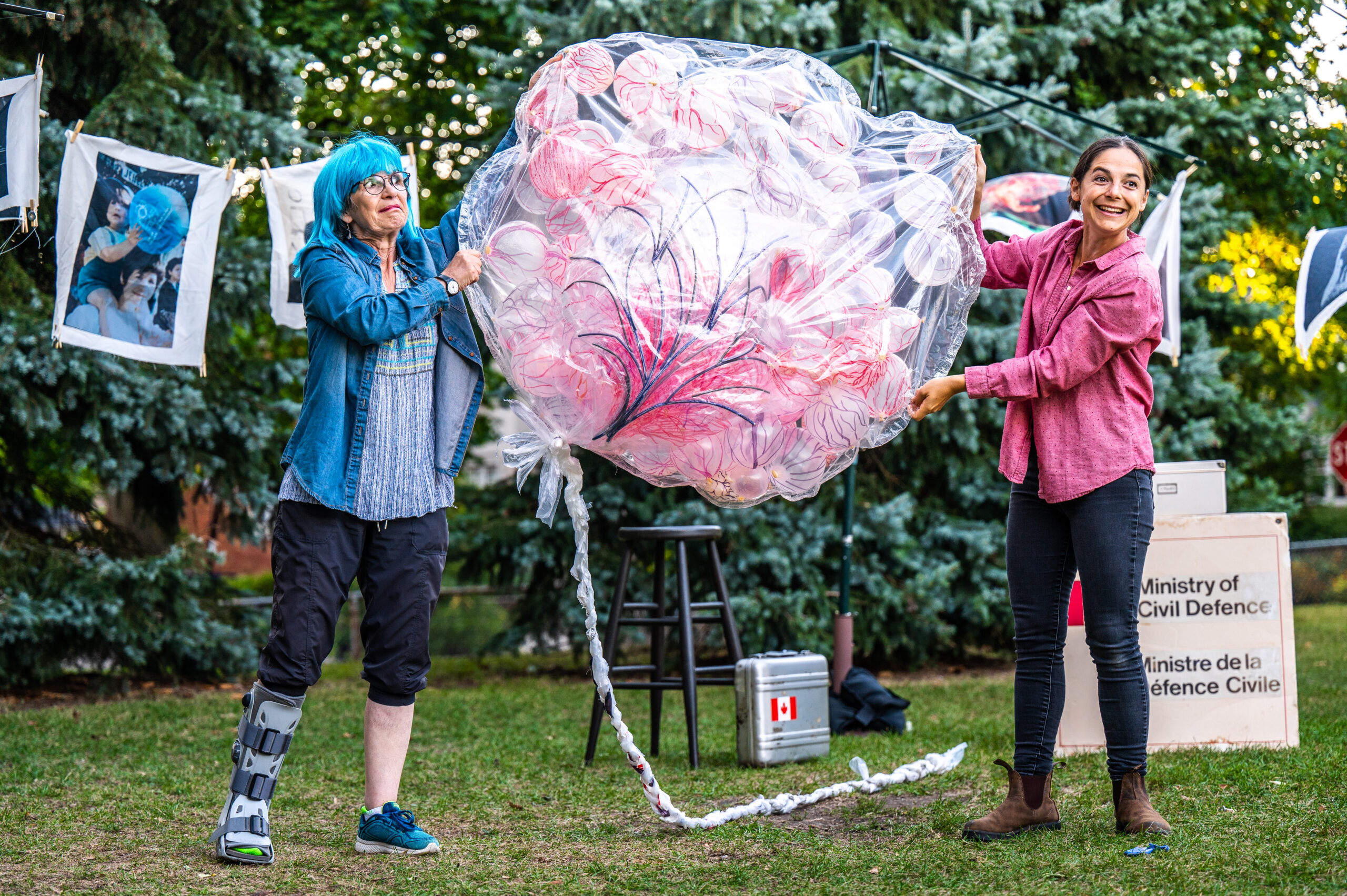 Apocalypse Play was originally conceived and presented at Buddies in Bad Times Theatre as part of the 40th Anniversary Rhubarb Festival in February 2019. Directed by ahdri zhina mandiela, designed by Astrid Janson, assisted by Farnoosh Talebpour and with dramaturgy by Mel Hague.

The show was presented in Hillcrest Park thanks to a City of Toronto Arts & Music permit.

Two Birds Theatre engages under the terms of the INDIE 2.2, professional Artists who are members of Canadian Actors’ Equity Association. 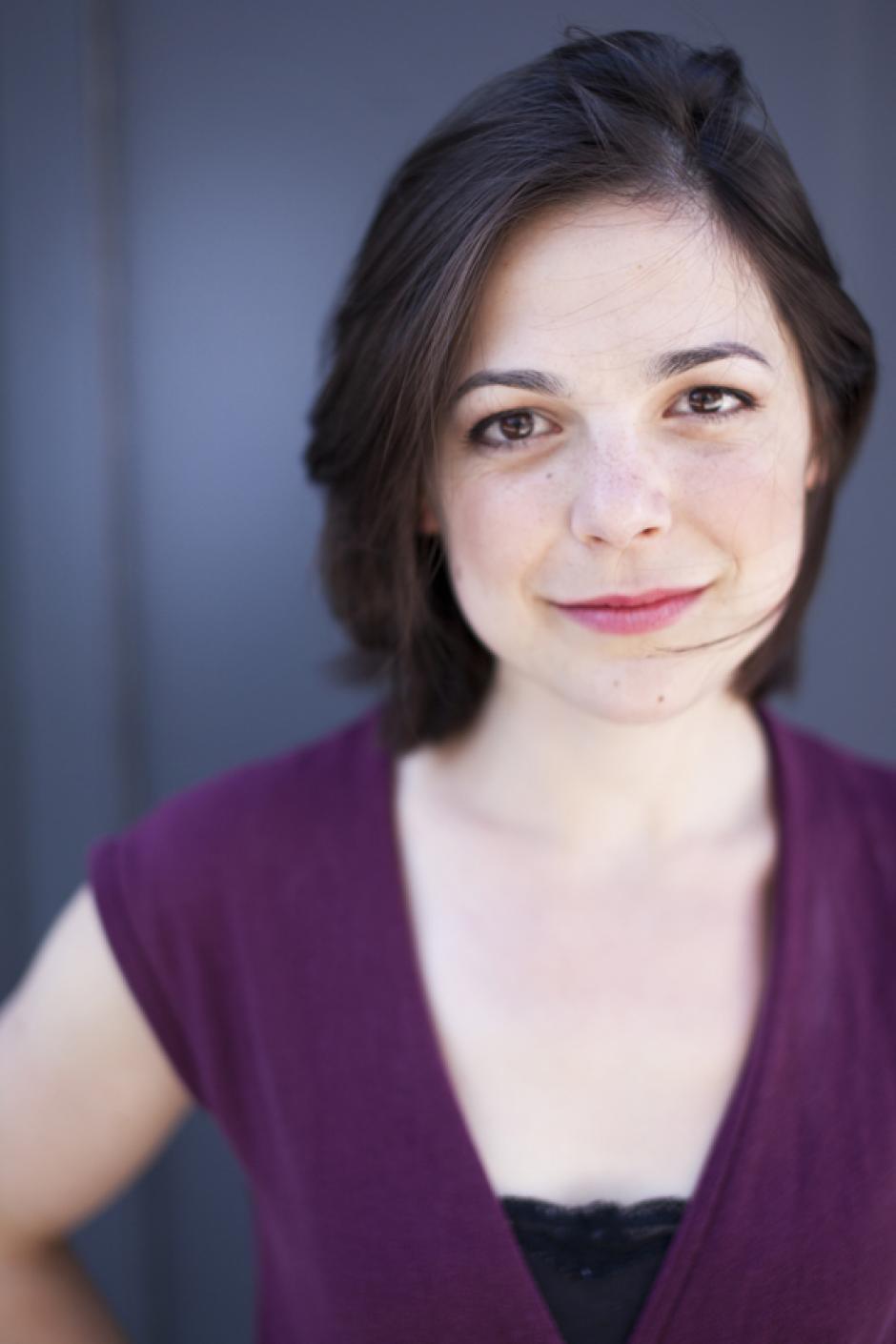 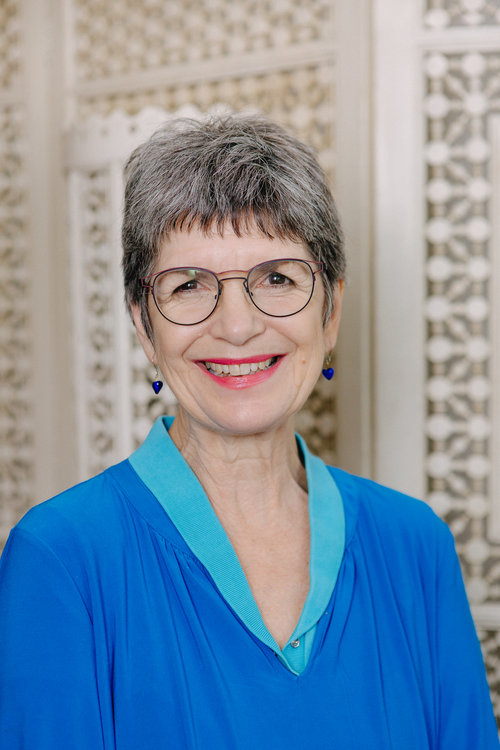 Kate Lushington ‘is always a political artist…a pioneering theatre creator since the 1970’s’ wrote late beloved critic Jon Kaplan in SummerWorks Artists to Watch 2011. Directing highlights include My Name is Rachel Corrie at Tarragon Extra Space & Your Dream was Mine by Shirley & Greta Cheechoo, both designed by Astrid Janson, and A Fertile Imagination by Susan G. Cole. Kate’s play Up Against the Wallpaper co-written with feminist lip synch troupe The Clichettes was a 1988 hit for Nightwood Theatre; she subsequently served six seasons there as Artistic Director.  Her 10-minute film Subway Transfer about a baby exchanged between strangers on the TTC won the Mouche D’Or at the On the Fly Festival, and her CBC Radio adaptation of Josef Skvorecky’s The Bass Saxophone won a Nellie.  Kate shares her theatre skills in various communities: Easy Money created with injured workers was shown at the Mayworks Festival. She is currently developing DSM: The Musical by Kerry Westell from Workman Arts. Formerly a member of PAND (Performing Artists for Nuclear Disarmament) she now supports SCAN! (Seniors for Climate Action Now!) 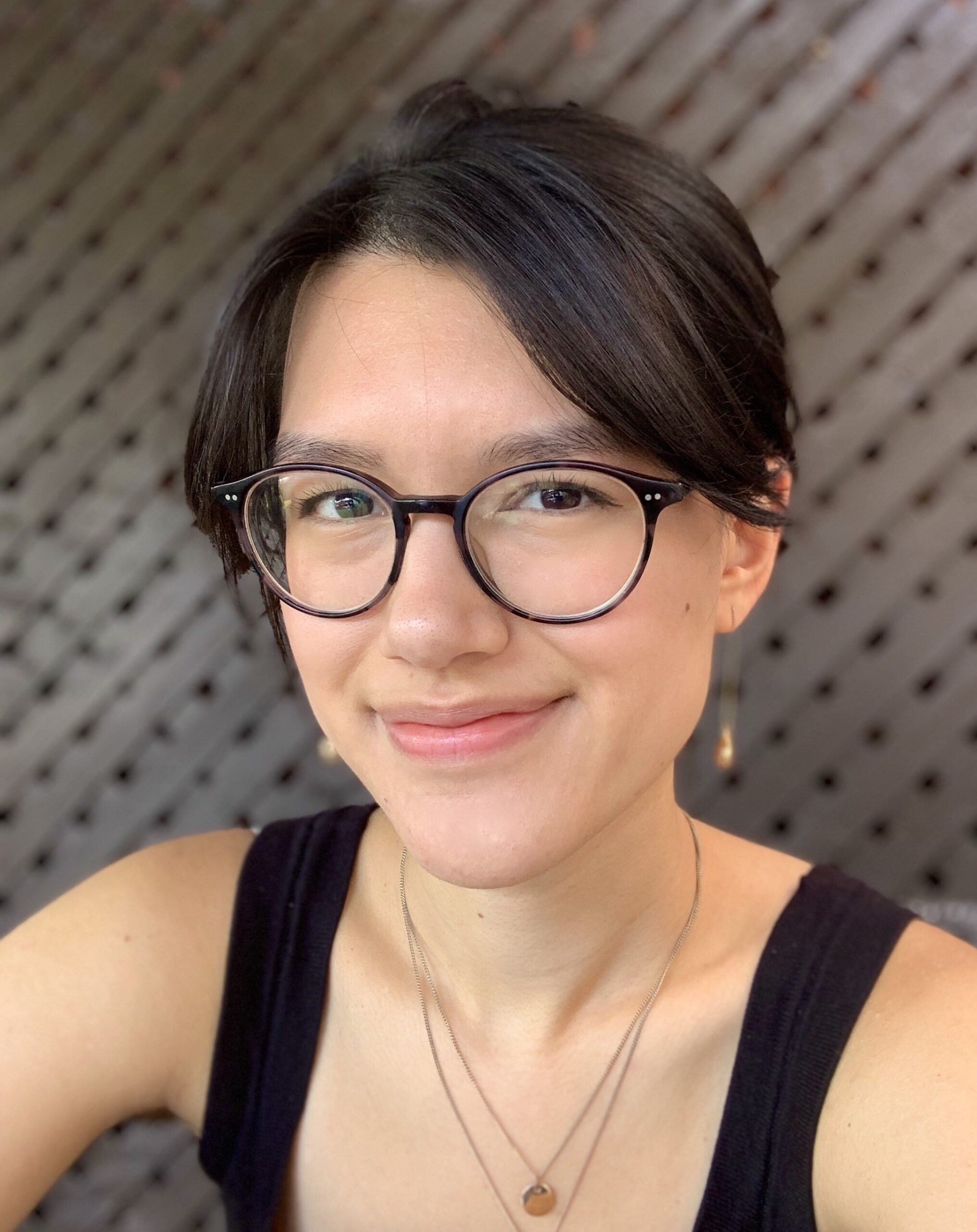 Abby Esteireiro (she/her) is a theatre maker and designer based in Toronto. She is a part of All Day I Dream About…Theatre, a theatre and film group which premiered What Are You Supposed To Be? at the 2021 Toronto Fringe Festival. Recently, Abby and company won the University of Toronto Drama Coalition 2020-2021 Award for Best Play, Best Production Design, and Best Set Design for their production of Porcelain Tigers. In 2019, she showcased her work at the Canadian Student Exhibition at the Prague Quadrennial of Performance Design and Space. Abby’s work experiments with digital culture, identity, and alternative worlds. 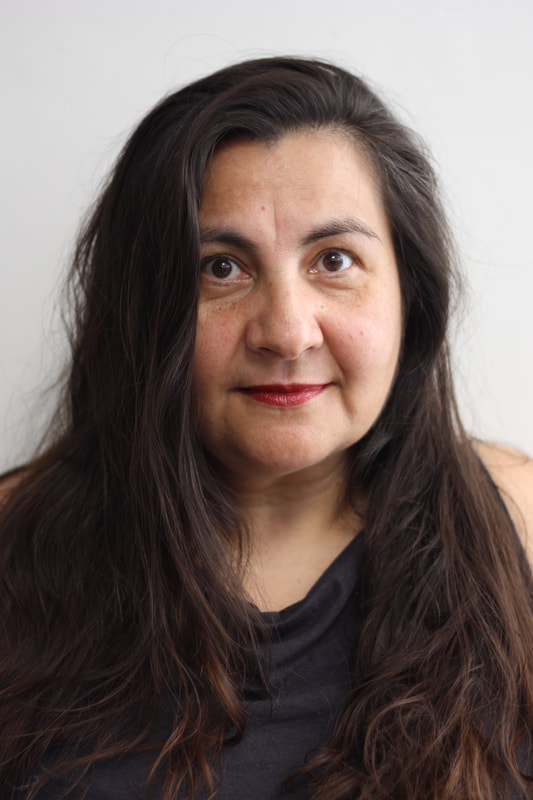 Alejandra Nuñez is a vocalist, percussionist, composer and mother to Natalia and Mathew, who holds a Masters in Theatre Studies from York University.  Born in Santiago Chile, Alejandra has lived and worked as a musician in Canada and the United States, she has performed in Europe as well as North and Central America. Her training on percussion has taken her to Brazil, Cuba, Puerto Rico, New York and Egypt.  She is the band leader of Latin Jazz Band Projecto Urbano Self titled CD with Mano Music. Alejandra has performed with The Toronto Dance Theatre and written scores for various plays, including Djanet Sears’ Adventures of A Black Girl in Search of God (Dora Mavor Moore Award Nomination – Musical Direction), Trey Anthony’s Da Kink in My Hair (MD, Soundscape), Scotian Journey by Anne-Marie Woods, How Black Mothers Say I love You by Trey Anthony, Black Theatre Workshop Production. Score, Soundscape, MD Michael Miller’s The Power of Harriet T! (Young People’s Theatre). 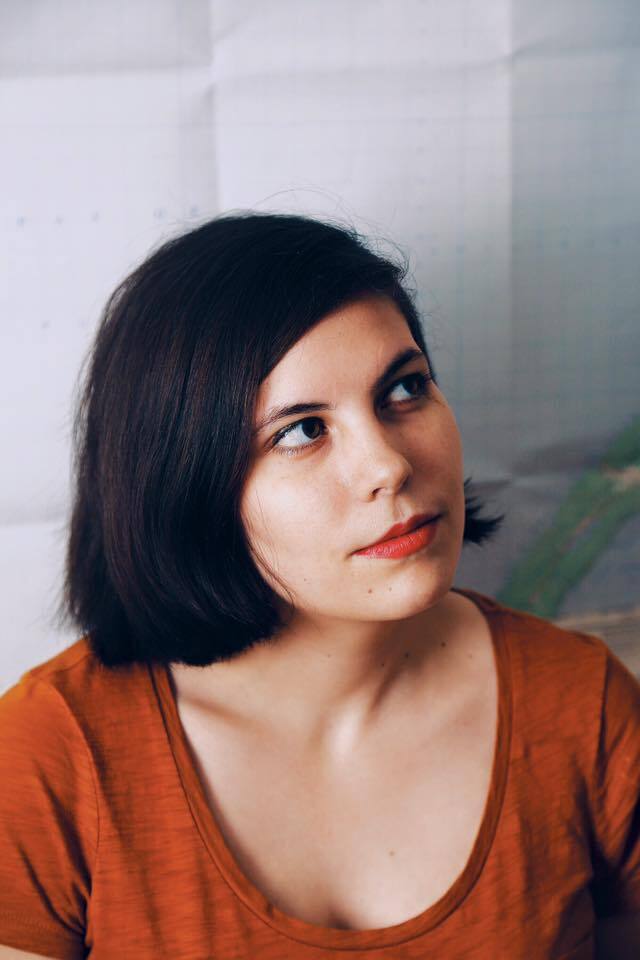 Dylan Tate-Howarth is a theatre artist based in Toronto, working primarily as a stage manager for new and/or devised plays. Selected stage management credits include Two Birds One Stone (Two Birds Theatre), Flashing Lights, Italian Mime Suicide, Paolozzapedia (Bad New Days) and Our Fathers, Sons, Lovers and Little Brothers (b​ current Performing Arts). She has also worked as a production manager with The AMY Project and Jumblies Theatre. Dylan is a co-creator of Probably Theatre Collective​ and co-curator of Probably Poetry​. 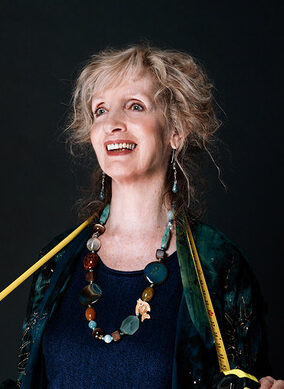 Astrid Janson’s production design work for theatre, dance, opera and film, has been seen on stages across Canada, from the Arts and Culture Centre in Newfoundland, to the Pacific Opera in BC. Canadian theatres include the Stratford Festival, Soulpepper Theatre, The Canadian Opera Co., Canadianstage, Citadel Theatre, The National Ballet, the National Arts Centre, and most Toronto Theatres, and 15 plays for Videocabaret, including the costumes for 13 of Michael Hollingsworth’s award winning History Plays. Her television career includes award winning films, specials and series. Civic projects include the exhibitions for the Ontario Pavilion at Expo ’86 and a new Discovery Gallery for the ROM. She has been recognized with numerous honours for her design work including the Silver Ticket Award for Lifetime Achievement in the Theatre, and an Honorary Doctorate from Wilfrid Laurier University. 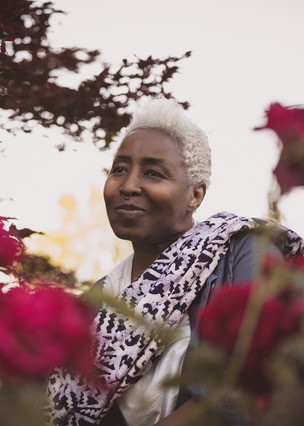 Jamaica born and Toronto based ahdri zhina mandiela is the Founder and past Artistic Director of b current Performing Arts, and is best known as a performance poet and theatre director. In addition to two books of poetry published by Sister Vision Press — Speshal Rikwes (1985), and dark diaspora…in dub (1991) — her who knew grannie: a dub aria was published in 2012 by Playwrights Canada Press, and other writings makes occasional appearances in several anthologies of contemporary Canadian writers since the 80’s. She’s recorded two cassettes: first and last, barefoot & black, and a 17-track CD, step/into my head on her bushooman rag label. 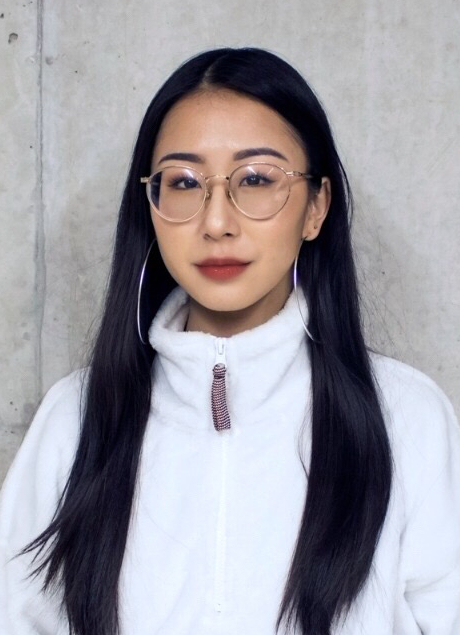 Elaine Zhang is a hip hop and open choreography based dancer born and raised in Vancouver, BC. Since moving to Toronto in 2017, she has trained at Dark Dance Company, FLUX Competitive Dance Team, and theTEAM. With over 35 experiences in teaching, directing, and performing dance, Elaine is excited to step into a new field and learn about the theatre community in Toronto. Through her U of T Women and Gender Studies course taught by Professor Judith Taylor, Elaine joined Two Birds Theatre Company as a research intern developing an in depth outreach survey for their upcoming production. In her current position, she brings her experience as the former director of FLUX to helping organize a successful Apocalypse Play. 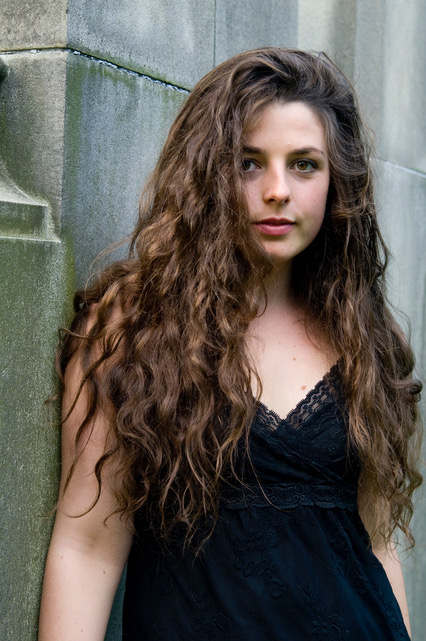 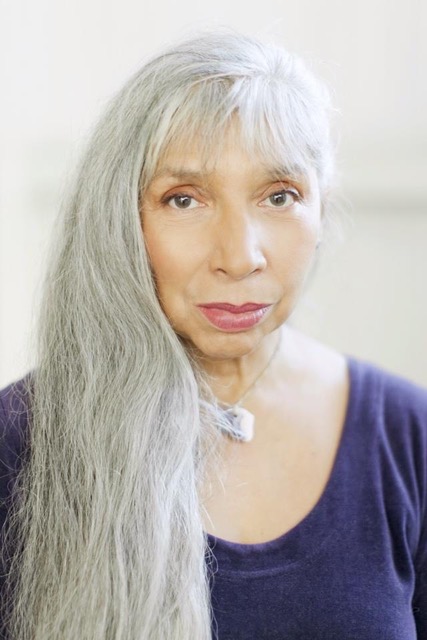 Monique Mojica (Guna and Rappahannock nations) is an actor, director, playwright and teacher, passionately dedicated to a theatrical practice as an act of healing, of reclaiming historical/cultural memory and of resistance. Spun directly from the family-web of New York’s Spiderwoman Theater, founded by her mother and two aunts, her theatrical practice embraces not only her artistic lineage through mining stories embedded in the body, but also the connection to stories coming through land and place. She has given embodied performance workshops throughout Canada, the U.S., Latin America and Europe. Monique came to Toronto as Artistic Director of Native Earth in 1983, and her first play Princess Pocahontas and the Blue Spots was produced in 1990 under Kate Lushington’s mentorship at Nightwood Theatre. She was co-founder of Turtle Gals Performance Ensemble with whom she created The Scrubbing Project, the Dora-nominated The Triple Truth and The Only Good Indian. Recent work includes the role of Aunt Shady in Marie Clements’ The Unnatural and Accidental Women at NAC, touring with the NAC Orchestra’s I lost My Talk and writing and performing Izzie M.: The Alchemy of Enfreakment. Upcoming: dramaturg for Kaha:wi Dance Theatre’s Sken:en. Monique is also the dramaturg for “Ayita”, a new work by Teneil Whiskeyjack which will premiere at Edmonton’s SkirtsAfire Festival in March 2022. 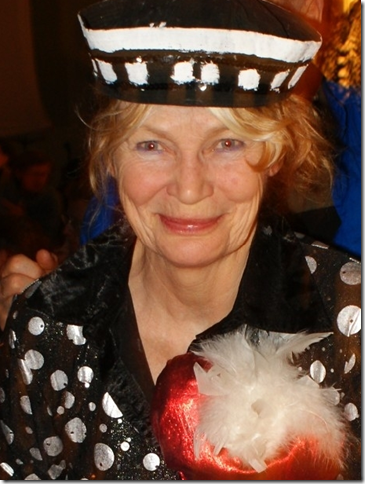 Alice has worked in the Trinidadian carnival tradition, and in theatre
spectacles with Shadowland and Jumblies Theatre among many others;
since 2003 she has made wigs for VideoCabaret, especially the epic play
series History of the Village of the Small Huts, garnering many Dora
awards over a long and illustrious career. She owns and operates her
own hair salon, The House of Big Hair, on Toronto Island.